North Dunes Habitat Restoration Project:
A Partners for Plants Project of The Garden Club of America

In 2009, members of the Carmel-by-the-Sea Garden Club began their long-term collaboration with the City of Carmel to restore the dunes at the northwest corner of Ocean and San Antonio Avenues. (1) This area is designated as an Environmentally Sensitive Habitat Area (ESHA) in which “plant or animal life or their habitats are either rare or especially valuable because of their special nature or role in an ecosystem, and which could be easily disturbed or degraded by human activities and developments.”

As an ESHA, the North Dunes fall under the jurisdiction of the City of Carmel, the California Coastal Commission and the California Department of Fish and Wildlife, and require a certified management plan. Members work with a dunes biologist in the fragile dune habitat where a Species of Special Concern, the vulnerable black legless lizard, burrows in the sand.

At the time the club launched its efforts, the North Dunes no longer provided high quality habitat, but had been degraded by plant litter, weeds and human disturbance. The original mission was “to recreate a self-sustaining native dune habitat with thriving populations of the special status species.” Over the years, members have removed invasive, exotic weeds and have helped revegetate the area with local dune species. The number and diversity of native plants have increased significantly.

When clubs throughout the United States were asked to select a project in their community to honor the 100th Anniversary of The Garden Club of America, the Carmel-by-the-Sea club chose the North Dunes. In addition to ongoing restoration, its Centennial Tree project involved the pruning and rejuvenating of old growth cypress, the ecological design of a swale, interpretive signage about the North Dunes and creation of a seating area with three log benches overlooking the site.

Dedicated club members continue to work at the Centennial Tree Project corner, the first section of the North Dunes to be restored. After a lengthy period of active involvement, the restoration is a success. Each year, one can observe a variety of native dune plants in bloom. In the words of biologist Joey Dorrell-Canepa, “The corner has very few weeds and a broad diversity of native species, all of which produce abundant seed. It is a stellar example of vibrant and sustainable dune habitat.”

On January 14, 2019, the North Dunes Habitat Restoration became a Garden Club of America Partners for Plants project. With this, the North Dunes joined a nationwide Garden Club of America effort to restore native plants and habitat on federal, state and local lands throughout the United States. An extension next to the original Centennial Tree Corner was added in the same year.

Before Photos of the Harrison Memorial Library 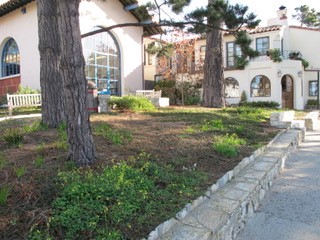 Working and Growing the Library Garden 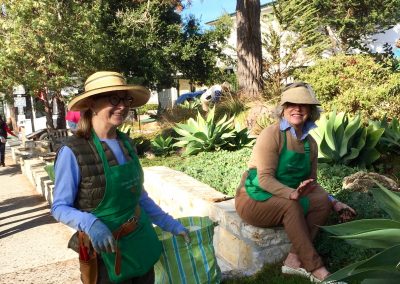 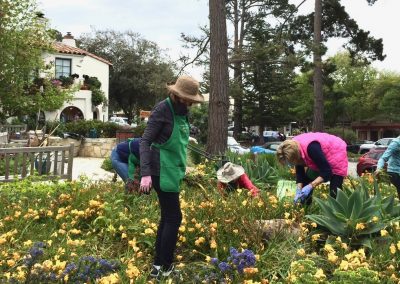 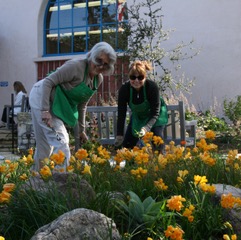 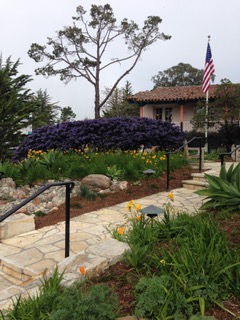 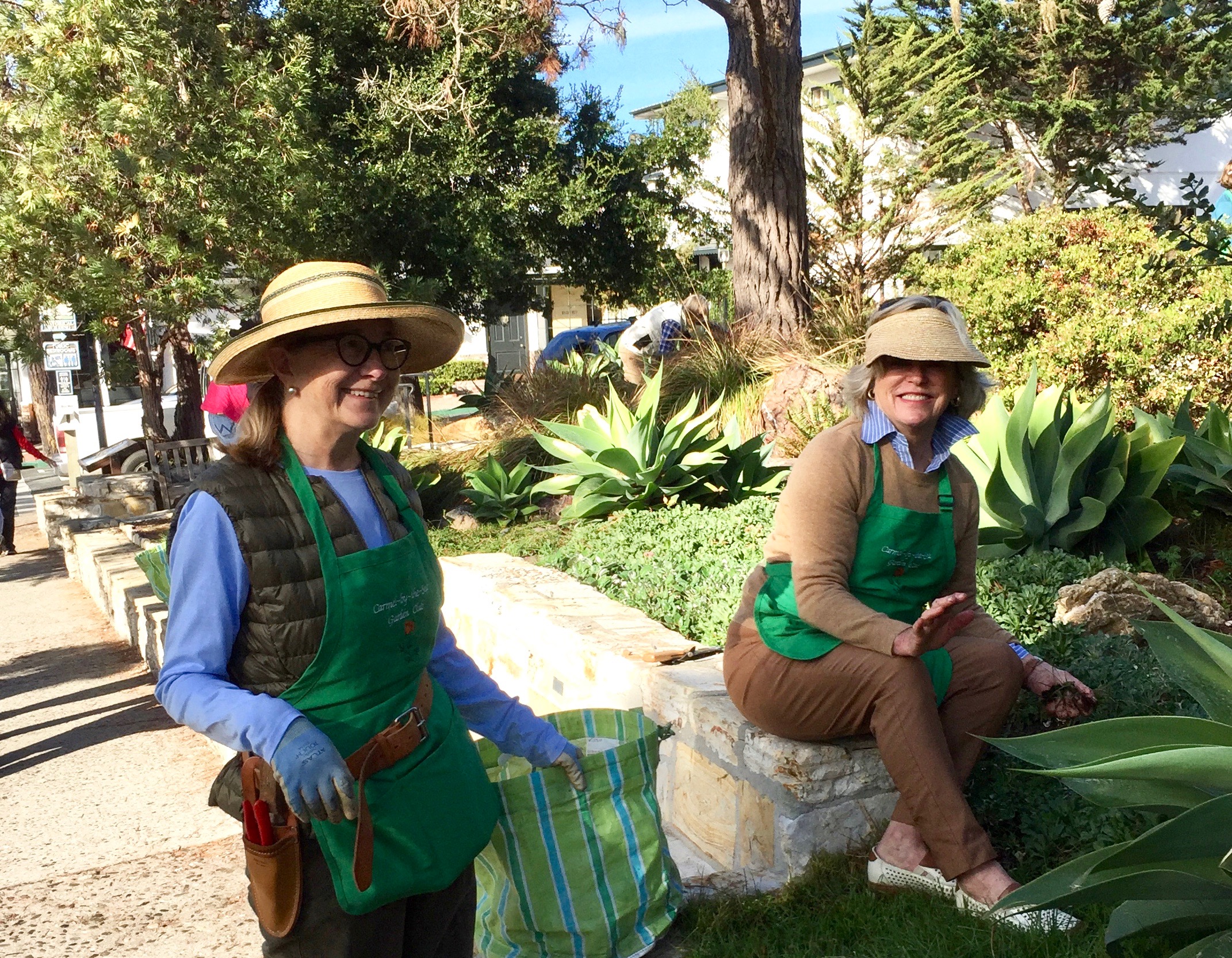 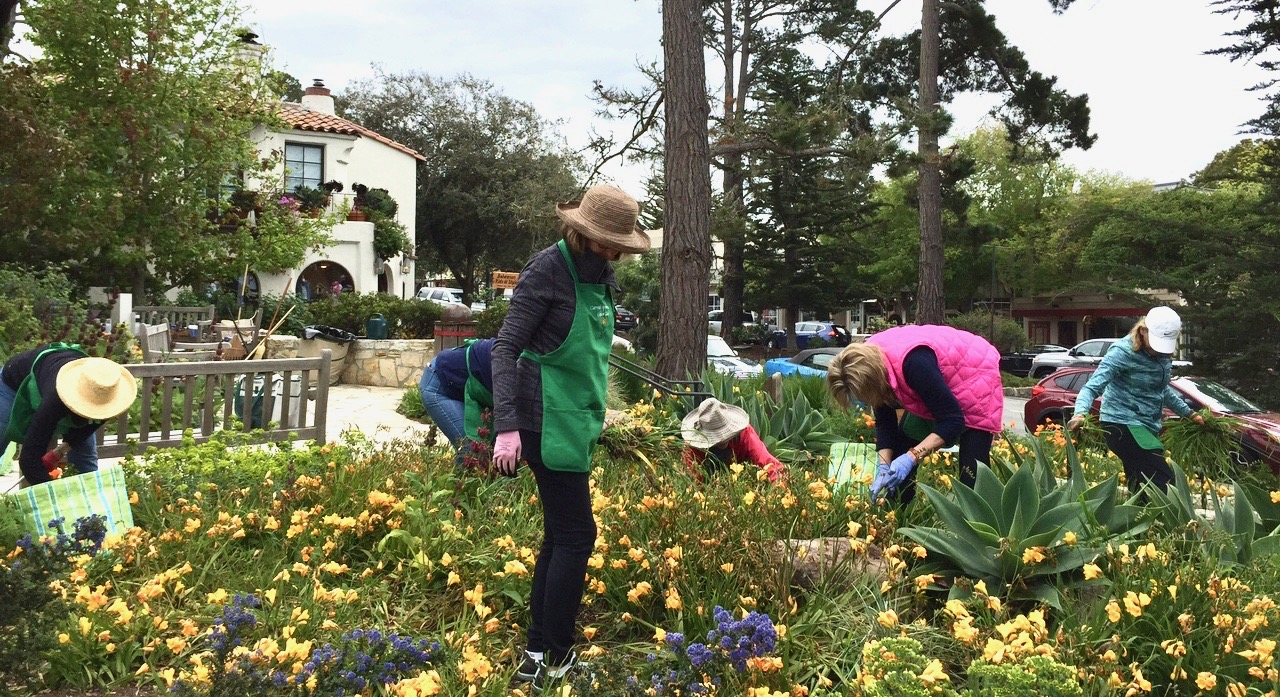 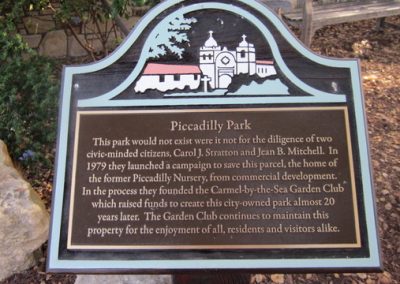 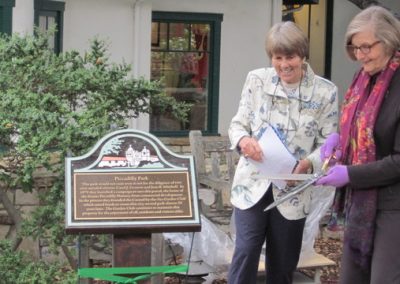 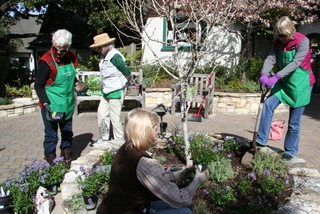 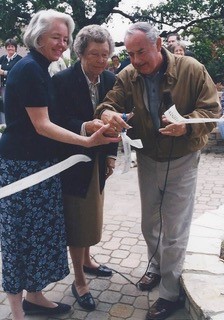 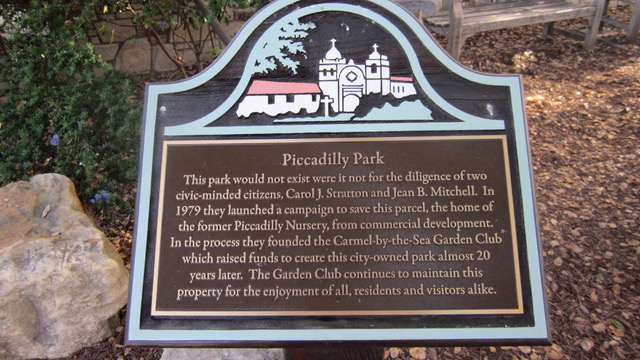 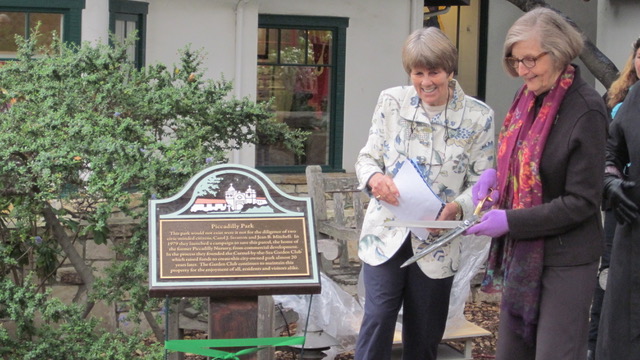 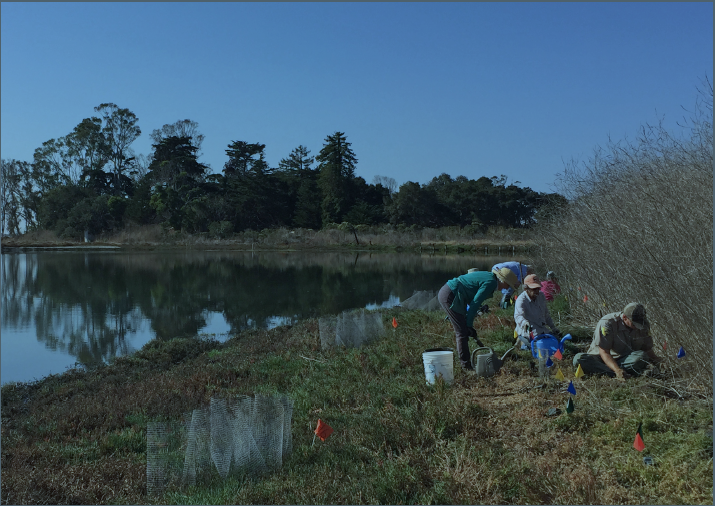 Our main focus for the past two years has been to assist with work at Elkhorn Slough National Estuarine Sanctuary Research Reserve as part of our commitment to the Partners for Plants Project. The focus of our efforts has been the restoration of native grasses to upland prairies and marshlands along the slough.

In August 2017 several members worked in the nursery to prepare salt grasses (Distichlis spicata) for planting in the marshlands around the slough.

In Nov and Dec. 2017 we helped plant the salt grass along with alkali heath (Frankenia salina) in the high marsh at Whistlestop Lagoon. Karen Tanner, UCSC researcher, will assess effects of rabbit and woodrat herbivory on newly planted transplants.

The Carmel-by-the-Sea Garden Club created a garden under the redwoods and Monterey pines at the town’s City Hall in 2012 in memory of its member Constance Meach Ridder.

With contributions pledged from Connie’s husband, Tony Ridder, and several of their friends, the Club was challenged to find, create or revamp a garden somewhere in the village. Surprisingly, the neediest candidate in the small commercial district was in front of Carmel’s City Hall, which tour buses and walking tours go by daily, perhaps because it was “put on the map” when actor Clint Eastwood was the town’s mayor in 1986-1988.

Mr. Ridder and his friends raised over $175,000 and although the City enthusiastically embraced the project and committed an additional $25,000, the task was still daunting. There were public hearings before committees, commissions and councils. An ongoing drought and a charge to use almost all native and drought tolerant plants presented a different palate than the donors’ vision of a pretty memorial flower garden. The City Hall structure is registered as a historically significant building in town, making the garden project even more high profile. The trees dropped needles and debris and allowed little sunshine to penetrate their protective branches. Perhaps the biggest obstacle was the infrastructure, or lack thereof, around the building. There were ramps and staircases and handicap accessibility issues to address. The wooden handrails were worn out and splintering. Liability problems such as tripping hazards existed where tree roots had pushed up the cement. Retaining walls were rotten and the gutters were so old that rain ran right down the building to the foundation.

A request for proposals went out to several landscape architects and designers throughout the state, but it was a Carmel landscape designer named Michelle Comeau who was unanimously chosen. With her local experience, which included Carmel civic projects, and enthusiasm for the challenge, she was a great fit. Michelle met every obstacle head on, not only finding creative and economical ways to fix many of the pre-existing problems, but also often to reuse and recycle materials.

The garden that was created has something for everyone. Native plants, ferns and Carmel creeper grow beneath the redwoods and Monterey pines. A lone bench under the trees is reached by stepping stones. The distressed cement steps in front and the ramp to the side were repaired, painted and sand blasted to look as if they had been there forever. The handrails were replaced with hand crafted branchlike iron work, a complementary and artistic look in front of the shingled English Arts and Crafts style building. On the patio in front of the City Hall offices she created two cement benches facing one another, with a burl wood table between them. City Hall employees may choose to lunch there, or people heading inside for business might want to meet first and go over a set of plans. A recirculating fountain at the end of the patio was created from a redwood stump, and mirrors the towering redwood nearby. There is even a dog hitching post, a Carmel necessity.

The patio provides a splash of color in this otherwise mostly native garden. Three large pots are replenished quarterly with seasonal flowering annuals and perennials of many hues. A raised bed in front of the building is also planted with colorful plant material, surrounding a large granite stone with a bronze plaque which reads: “In memory of Constance Meach Ridder, 1941-2011, Member, Carmel-by-the-Sea Garden Club”.

On October 5, 2012 a dedication, celebration and reception was held in the garden, attended by City Hall officials and council members, Carmel citizens, many Garden Club members and a large representation of Ridder family and friends.

In early 2015 the Club submitted documentation of the garden to the Garden Club of America Collection of the Smithsonian Institution’s Archives of American Gardens. It was accepted in May of 2015 and is now a part of their permanent collection.

Unlike the other Garden Club projects, such as Piccadilly Park and the garden at Harrison Memorial Library, the Club’s role in this project ended with the successful completion of the garden and did not include ongoing maintenance. The City is responsible for maintaining the garden, although the Club, utilizing the remaining funds, does administer and oversee a part time gardener to tend to the seasonal planting around the patio and the memorial stone, including the large pots. 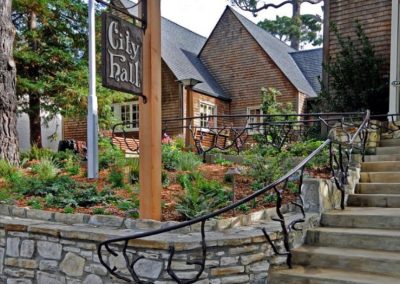 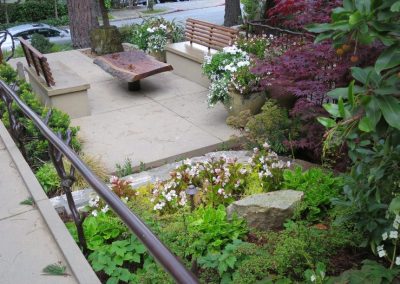 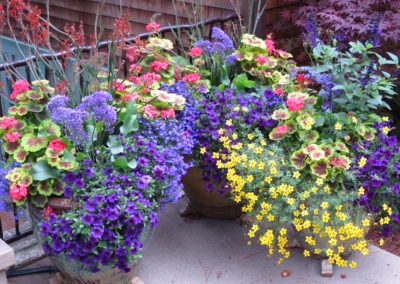 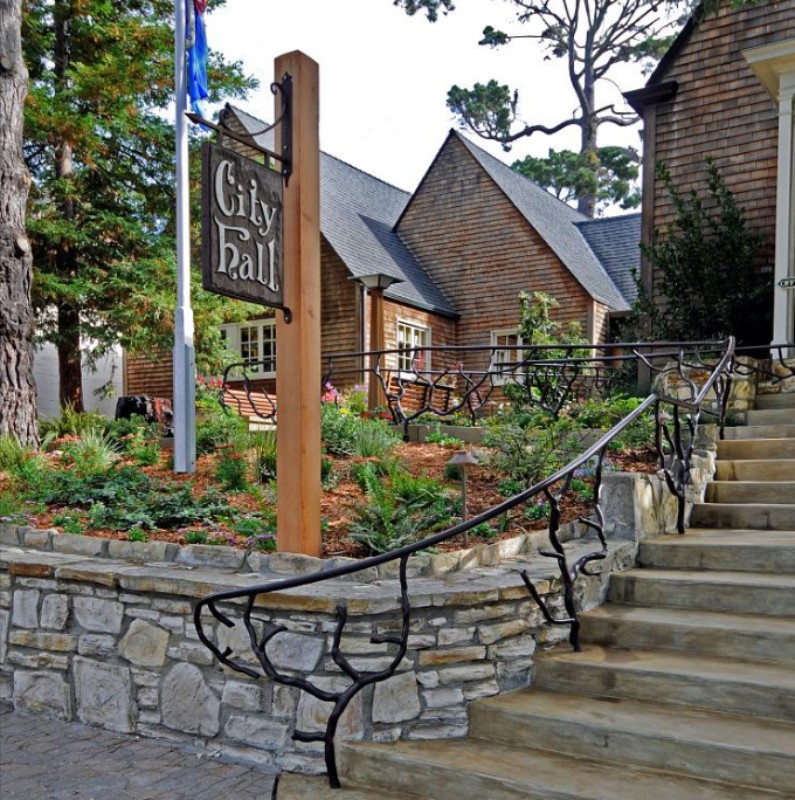 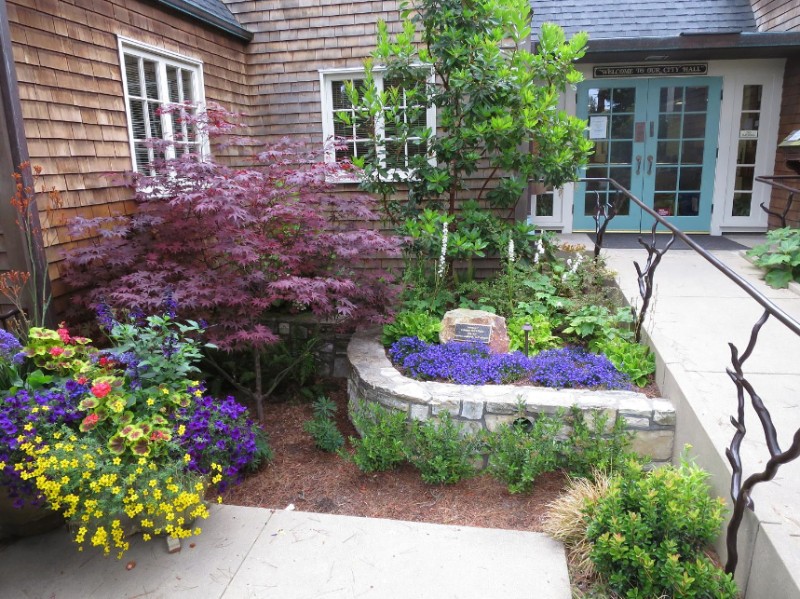 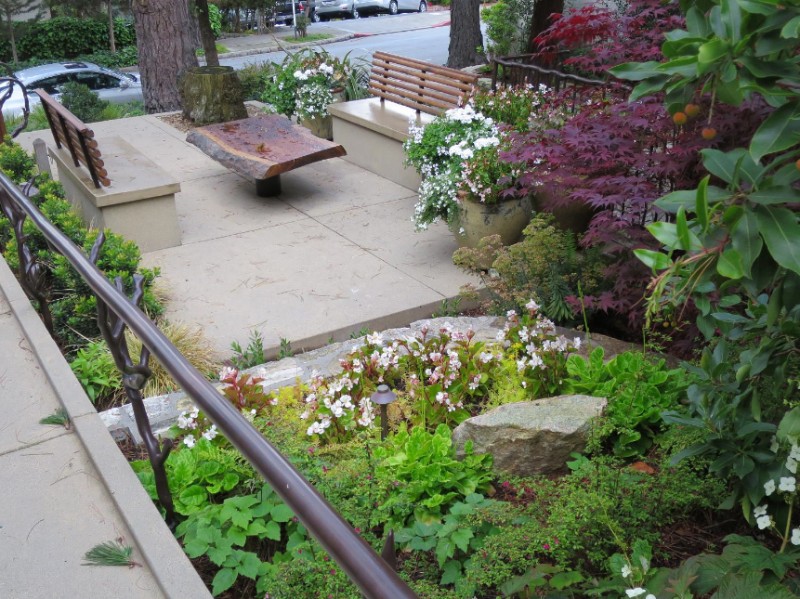 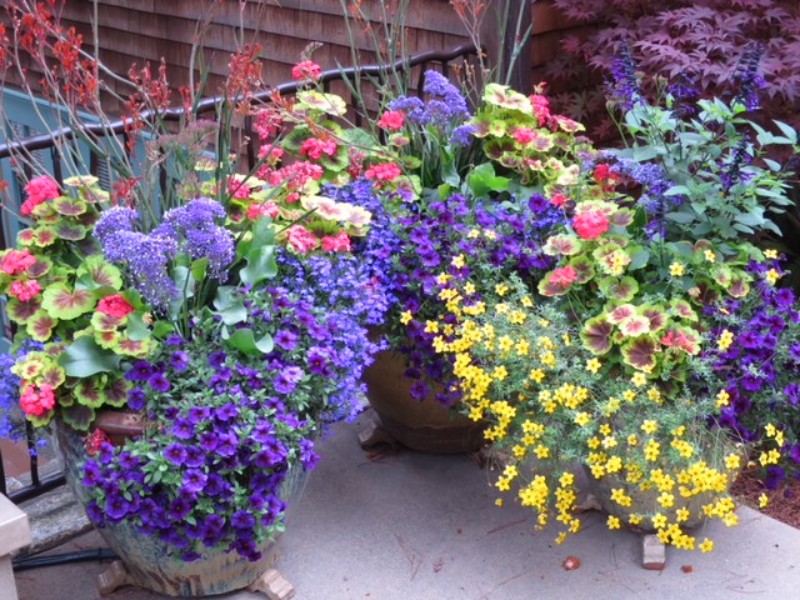